Goat rearing is an enterprise that is both suitable for poor households who own little or no land, and is resilient to climate change. Goats largely browse shrubs which are more tolerant of rainfall variations than the grasses eaten more by sheep, cattle and buffalo.

The project, Small ruminant value chains as platforms for reducing poverty and increasing food security in dryland areas of India and Mozambique (imGoats), was implemented in Udaipur district in Rajasthan from 2011 to 2013. The International Livestock Research Institute (ILRI) partnered with BAIF Development Research Foundation, an NGO, to implement the project.

The project worked with 2,685 goat-keeper households in two blocks of Udaipur district in Rajasthan. These were organized into 244 groups that were facilitated by 25 community based service providers called Bakri Mitra (field guides). These are local goat-keepers with some education who are trained on improved goat husbandry practices. They also are the link between the goat-keepers and the Animal Health Department staff with whom they work closely.

The biggest outcome of the project was adoption of improved practices regarding health, feed and breed management among the goat-keepers linked to improved market participation. The training of the Bakri Mitras was also an important step towards improving animal health service delivery in rural areas. Below we share the experience from a female Bakri Mitra named Roopi Bai. 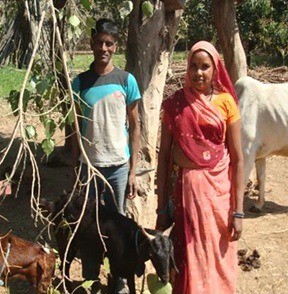 Roopi Bai lives in Galdhar village with her husband Bherulal Garasiya and their two sons and two daughters. She is the only woman among the 25 Bakri Mitra trained by the imGoats project. While Rajasthan is traditionally a male dominated society, Roopi Bai is able to work as a Bakri Mitra thanks to the support and encouragement of her husband. She works for 5 to 6 hours a day visiting a selection of the 40 households in Galder village. She also trained her husband to perform certain basic treatments so that he can provide the services in case she is not available. They both are knowledgeable and their skills are in demand.

While she always kept animals (as did her parents and everybody else in the village), she didn’t think that she could earn an income from her knowledge. Before training as a Bakri Mitra, she mostly spent her time at home running a small grocery shop (Kirana) and a flour mill, and also tailoring. She and her husband developed these activities step by step, learning on their own and following guidance from others such as the local teacher. Roopi Bai’s overall personality evolved over the period of the project in the following roles:

Group facilitation: Roopi Bai facilitates 4 goatkeeper groups (40 households). Her facilitation skills improved over time. Initially the group members were skeptical but after they saw her perform different activities and interact with veterinary officers, she gained their confidence.

Innovation: Roopi Bai participates in imGoats “innovation platform” meetings, and uses this as an opportunity to raise issues pertaining to her village. She helped developed and execute action plans, resulting in an expanded scope of activities of the innovation platform.

Group participation: A self-help group of Bakri Mitra was started in June 2013. The main purpose of the group is to be able to purchase veterinary drugs in larger quantities to save costs. Roopi Bai is the frontrunner in terms of the volume of medicines purchased. From December 2013 to March 2014, she purchased medicines worth Rs 2000, and also purchased an additional Rs 2000 of medicines from the local pharmacist to meet urgent requirements.

Entrepreneurship in service delivery: Roopi Bai was one of the first Bakri Mitras to start charging for her services and then convinced her colleagues to do the same. She has also expanded her services beyond her group members and is now assisting 100 households in her village.

While the amounts the Roopi Bai charges are small (Rs 15 to treat an injury, Rs 6 per animal for de-worming or vaccination), she is able to make a reasonable amount of money. She earned Rs1,000 per month for de-worming animals between September 2013 and April 2014. She also supported BAIF with PPR vaccination (the main killer disease in goats) and received Rs 2,848 for her services. Enterotoxemia (ET) vaccinations were given to about 300 animals in June 2014, giving her a net return of about Rs 1,000. 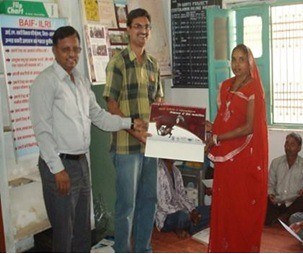 While her Bakri Mitra activities are still expanding, this still remains a secondary source of income for Roopi Bai and her husband. What is also important is her increased confidence in her interactions with people. She believes that her services are helping people to save their animals. Initially she used to go door to door to convince goat-keepers in her village to avail of her services. Now many of them bring their goats to her door-step to get them treated, especially for injuries. She feels this is a positive sign of the growing awareness of the benefits of health-care and also confidence in her ability to provide treatment.

This story was first published  by IFAD India in its November 2014 newsletter.

In addition to organizations recognized for specific projects and outputs, we thank all donors which globally supported the work of ILRI and its partners through their contributions to the CGIAR system

Welcome to the blog of the project, Small ruminant value chains as platforms for reducing poverty and increasing food security in India and Mozambique, or imGoats in short.